If you look at the ingredients list of cosmetic creams and lotions, it’s likely that the word jojoba will appear somewhere. This rich yet non-greasy oil is used as the base of many such products due to its similarity to the natural oils produced by the skin. Its benefits have long been known to the Native Americans, who have used it for their hair and skin, and to treat burns and wounds. It’s convenient to buy online, and we recommend purchasing the Renewalize brand.

Jojoba oil is extracted from the nut of a shrub-like tree known as Simmondsia chinensis, which is indigenous to North America. It is found mainly in the hot, dry regions of the south western states, particularly Arizona and California, and in northwest Mexico.

Jojoba oil is unlike other oils in that it is composed of long chain monounsaturated liquid wax esters, rather than the usual triglycerides. This means that, technically, it is a wax rather than an oil, even though it is generally referred to as an oil. When raw, it has a slight nutty smell, and a clear golden color. The lack of triglycerides makes it a very stable liquid that does not easily oxidize, and so therefore it can be kept for long periods of time.

The wax monoesters contained in jojoba oil means that, of all the natural oils available, it most closely resembles the composition of sebum, the oil produced by the glands in your skin. Its texture is non-greasy and, since it is a non-comedogenic oil, it won’t block your pores. This, combined with a low melting point of just 10 degrees and the fact that it is odorless and colorless when refined, means that it is a common choice for the base of many cosmetic creams and lotions and can also be used as a carrier oil for some essential oils.

Jojoba oil has many benefits, which is reflected in its wide range of uses. Its high levels of vitamin E help the skin to retain moisture and also neutralize free radicals that can damage cells. Vitamin E supports new skin cell growth, which speeds up regeneration. It’s also effective for the treatment of minor wounds and burns. As a result, it can help to minimize the appearance of scars, whether recent or older, and it can also cause stretch marks to gradually fade.

Like many oils, jojoba oil is naturally antibacterial and anti-fungicidal, non-toxic, non-allergenic, and non-irritating. It is gentle enough to be used on even sensitive and damaged skin, helping to soothe skin conditions such as eczema and psoriasis. For acne sufferers, it properly treats the causes of acne and it also prevents infection.

Although jojoba oil is deeply moisturizing, it also effectively treats oily skin. Its similarity to sebum will clean without blocking pores and so it prevents the skin overproducing the oily fluid by ‘fooling’ it into believing that it has produced enough.

For those with dry, damaged or frizzy hair, Jojoba oil is very beneficial. It can be used as a conditioner, hot oil treatment, or as a serum to tame unruly hair. For those experiencing hair loss, the oil’s ability to remove excess sebum from the follicles while moisturizing the scalp, helps to promote the health of existing hair and encourages new hair growth.

Jojoba is also one of the best massage oils available. Just a small amount is needed for lubrication, and it is suitable for using on people with skin conditions that may be irritated by other oils or lotions. It is also a perfect base to add essential oils to for those who enjoy aromatherapy.

This oil is now widely available to buy. While many large grocery stores now stock jojoba oil, it’s probably not organic, and may have undergone some additional processing. Health and whole food stores like Trader Joes are more likely to stock organic jojoba oil, while a range of brands can be found online, both direct from the manufacturers and through amazon.com.

What to Look For

To get the greatest benefit from jojoba oil, it should be organic, cold-pressed, and unrefined. Unrefined oil will be clear, with a bright golden color, and have a mild nutty scent. When buying, consumers should look for oil sold in dark colored glass bottles. Colorless bottles mean that the oil can be damaged by light and will start to degrade more quickly, while glass packaging ensures that no chemicals leach into the oil.

The word ‘pure’ is used a great deal on jojoba oil packaging. While this may suggest that the oil meets all of the above requirements, it simply means that the product contains only jojoba, with no reference to the actual quality.

Price is a good indicator of quality and provenance, as good quality oil is unlikely to be sold at a cheap price. Where the product price is low, it may have been chemically extracted, or may have been mixed with oil from a second pressing of the nut. Both should be avoided, as the oil will be of an inferior quality and users will not experience the full benefits. 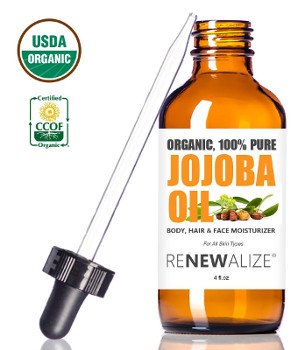 Renewalize is a cold pressed and unrefined jojoba oil that is both USDA and CCOF Certified Organic. Renewalize makes a range of pure, organic oils, of which jojoba is one, and essential oils.

Their jojoba oil comes in a large 4 ounce, dark amber glass bottle, which is designed to protect it from oxidization and light damage. For ease of use, it is supplied with an integral eye dropper.

This product is available for sale on Amazon. 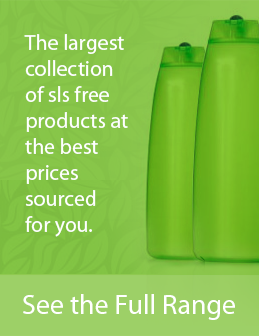